Thank you for stopping by! I'm a recent fan of the group whose song lyric is my username. ;)
Every now and then I post episode reviews and trial recipes, so feel free to explore. :)

This lovely layout is by

Thesis #2 has started and I need all the motivation I can to get to keep going. I've been having such a hard time sleeping for the past 4 months that my productivity has just been going down. My Mom told me that my Dad had bouts of insomnia but then it got better...it's been four months and for the past week, I totaled 10 hours. I'm just easily irritable now. :|

Anyway, it's been so long since I've been updated with Arashi and anything in the Japanese entertainment. I've heard Anne Watanabe and Higashide Masahiro have already welcomed their twin girls (twins!! <3) and that's all I know. As far as Arashi is concerned I'm quite off the loop? Has Waku-Waku Gakkou happened? Any funny moments in recent episodes? Pfft. Who am I writing to here? XD

Anyway, as my way of just enjoying the SMAP that was, I looked for an SMAPxSMAP episode (May 2016) I'd like and decided to do a translation snippet for the episode with Ichikawa Ebizo and his son Kangen. His son looks so much like his wife, Kobayashi Mao. I found the episode adorable because it was a bunch of grown guys laughing to the answers of a 3 year old boy.
I just decided to post a snippet of the tasting and judging time:
( Collapse )

This is a continuation of the post I did on SF. I wasn't able to include this because entry was too long to post.

The sureball way to make me say yes to translating or reviewing a segment is one thing: FOOD. It's the one thing that makes me watch an episode more. When Ii Mise, Kudoi Mise was still a segment in Shiyagare, I enjoyed it very much. I regress, last week, I said I was choosing between reviewing this segment or doing the NewsZERO translation of Typhoon Haiyan. I opted to do NewsZERO last week. But I still want to give a little more attention to MatsuJun (especially since his drama is coming up —99.9%) so I decided to do a review on this segment!

Location: Osakikami Island in Hiroshima
Episode Date: 2016.02.27
This is MJ Guest:  NONE
Episode Objective: To get a green Claire Oyster.
[Want to know what a Claire Oyster is? Click here! :)]

Famous oyster from the largest oyster-producing region in the world. The oysters are finished in knee-deep claire (rectangular salt ponds) for a minimum of one month, during which they fatten and take on a sweeter, fruitier flavor from the water and phytoplankton in the ponds. 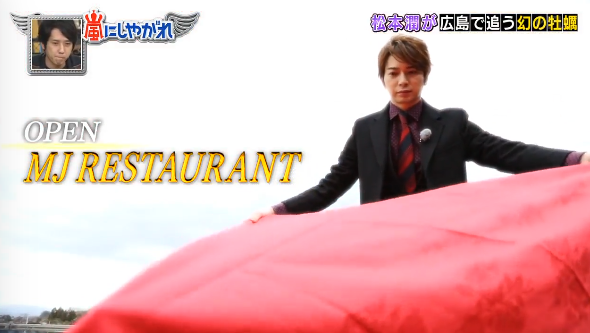 In this segment Matsumoto-san makes different variations of dishes with oyster as the main ingredient.
( Collapse )

Last time I posted there were comments about the Nagase x Sakurai Disneyland trip which i had no clue about--to my surprise, it was the Oshinobi last Saturday! Awesome! The most serious Arashi member in the happiest place on earth!

I guess it's okay to post the first picture with Nagase and Sakurai because most of you already knew he was the guest anyway. :) I did look forward to this because Sakurai-san seems more relaxed with certain guests (eg. Harisenbon) vs the female celebrities. While he is polite, I think there's a closeness (and ease?) with him and his senpai you can't miss. {C}In a Shabekuri 007 episode Nagase said he often gets mistaken for a Filipino and now I see why. He doesn't look Japanese at all when you cover his hair! :P
( Collapse )( Collapse )
Lately, I haven't been too happy with Sakurai's oshinobi...because it's almost as if I know he'll be caught? Haha.
3 Lightning Arashi's!

This is a treat (and of course additional points for those who read up to the very last part), I know this weekend will be the Tsukutte Miyo segment for Aiba-chan. I hope Sakurai gets a handmade gift too--Ohno san promised them! :P

First of all, HAPPY NEW YEAR EVERYONE! I hope you're resting well and for those who celebrate New Year's during this time of the year--hope you've ate heartily! :) Take care and don't get burned with fireworks!

I spent most of my new year eve preparing food and watching Kouhaku in between. The performances were lovely. One singer even performed in a gold leaf dress on a mechanical phoenix! Lovely!

The V6 + Perfume medley with the Disney characters were adorable. Miyake Ken, although with minimal screen time was his usual adorable boy self.

As for the ARASHI performance--which my mom and sister and I were looking forward to...it was  a performance that began and ended too soon. I understand JCD is about to start but even the song choices and the hype with Star Wars made me feel like I ended up expecting too much that's why I ended up a little disappointed.

It's Friday! Friday! It was my turn to post on

storm_freaks and after posting, all I can say is GO ARASHI.
Posting a snippet of what I posted there to my personal journal. :)

Tower Records Japan Ranking!
Tower Records has announced the 2015 Best Sellers: The Beatles' album won first place for their Western Category while ARASHI has won for the Japanese for multiple releases. Namely:

Other winners include AKB48 for their single [僕たちは戦わない], Big Hero 6 (movie), Wednesday campanella for J-Indies among other winners.

The Miyagi DVD covers have been released and this is how they look like (brown - Regular Edition, fields - Limited):

An ARASHI Christmas Gift? <3
Word has it that ARASHI will be performing LIVE on Music Station Super Live on December 25, 2015.
With concert tours, performing in Kouhaku and hosting Johnny's Count Down, looks like the five of them will be having a pretty packed winter.


BONUS--Arashi members and their concert tickets? (VS ARASHI Translation Snippet)
[Spoiler (click to open)]So in the most recent episode of VS Arashi, the plus one guest was Kondo Masahiko--one of ARASHI's super senpais in the office. Now, prior to the Pinball runner, Mitz Mangrove reveals that he and Chris go to Johnny's concerts together. They watched NEWS together and will be watching V6 the next week. He said he tried to the death to get tickets for ARASHI but in the end, he wasn't able to. So he ended up buying their Hawaii DVD a week ago. Mitz even says that "I watched it until the helicopter disappeared." (meaning he watched til the very end).

Furthermore...before the game started (and after the typical "what do you think of ARASHI" + Matchy-san saying something about the JE sports activity a pain in the butt) , Matchy-san asks if Arashi orders their tickets to which they replied "We do." and Matsumoto-san further clarifies by saying: "We also don't have tickets." To which Aiba-san adds to with: "Even if it's us..." Matchy-san clarifies "Even if it's you guys you can't get them too?" Sakurai shakes his head and says "Muri muri" and Matsumoto-san is overheard with "We don't have them..."

This was something I was always curious of. I always had the image that they may have complimentary tickets--because after all it's THEIR concert but apparently not. They have to order and go through what Mitz called the deadly process of getting a ticket just like their fans...and I'm guessing Sakurai has tried to order tickets too considering how he shaked his head and repeatedly said 'muri' with more conviction than the other members. haha! 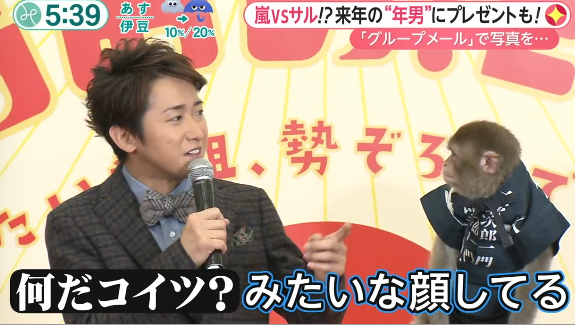 Image from KnH
I was watching snippets of the AraOme from Minna no News and I found it hilarious when Ohno-san was supposed to get a kiss from the monkey (cos it's his Zodiac year coming up) when the monkey seemed hesitant. And after the kiss, Ohno laughs and points at the monkey saying "The monkey's face is like "What's with this guy?" HAHAHA! Oh dear Monkey, you don't know how many fan-girls would love to be in your place.Haha

So, today as an appetizer of sorts, I decided to try an 嵐 recipe. Since enoki is popularly used as a condiment to nabe dishes, it was down to the typical butter-yaki (bata-yaki) or to have it tempura-style like the Ii Mise, Kudoi Mise at Tensuke. (This was the 2015 Higashiyama Episode, if I'm not mistaken).

So what I already had prepared prior to my epic fail:


So the only missing ingredient is...ENOKI! So time to prepare:

So what happened instead?
I served plain enoki tempura with the cheese sauce drizzled all over. Imoto loved it but I couldn't help but imagine how much better it'd be if it were done according to recipe.

I was pretty surprised when this was mentioned to me. I had no idea Matsumoto -san kept a blog. (I alwayshe'd be more of a photo book person not a...blogger type. XD) Anyway, when I read it I noticed frustration but not exactly suicidal.

coolohoh and I worked together with translating and we hope this makes you feel at ease: Jun's perfectly fine just a little stumped for the concert nothing serious. :-) 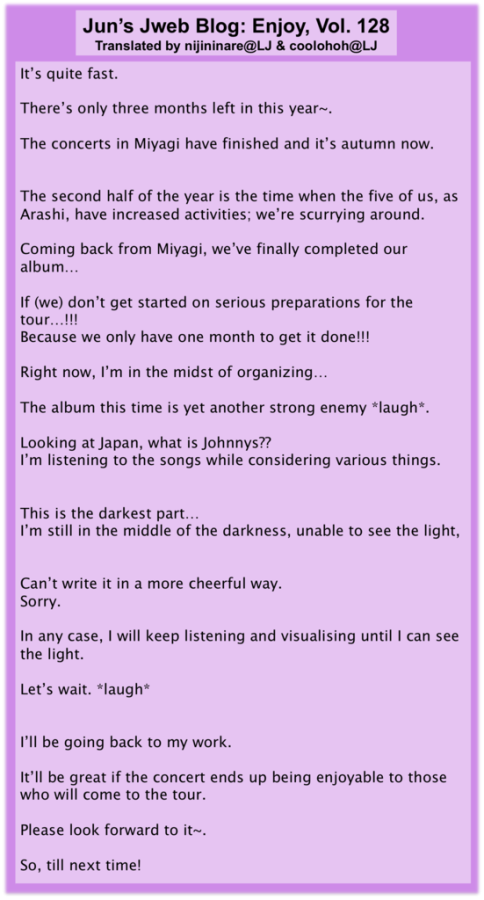 It's been a long and tough two weeks. SO MANY schedule changes in the uni to accomodate the class suspensions and cancellations due to weather. I'm glad things are progressing but the bumps in the road do get a little irritating when you've been running on minimal (or hardly any) sleep.

While relaxing with my favorite matcha soy drink, I realised two things: